Over the weekend, I went on three bike rides. I had ridden through a storm Friday evening and figured that biking through a light drizzle on Sunday would be no problem. Plus, my bike was already horribly dirty so there wasn’t much worse I could do to it. 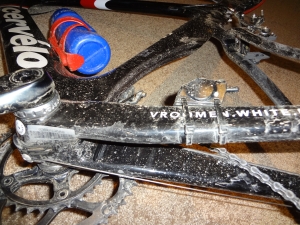 No more than a half a mile into my ride I had somebody pull out in front of me. No problem, I got on the brakes and avoided rear ending them. Half a mile later, another SUV almost hit me. This driver apparently thought that we could share the lane and would have run me off the road if I didn’t yell at him at the top of my lungs. It was at that point that I wished my bike was equipped with one of those air horns that my first tricycle had. With that crisis averted I hopped on the Keystone Trail. No sooner than I had forgotten about my near collision I found my self on my side with aching pains. I had made the turn onto the first bridge, a wet wooden bridge, when the wheels slid out from underneath me. Thankfully, I wasn’t badly hurt and my bike wasn’t missing any pieces. However, I did end up with some pretty mean road rash on my arm and hip. 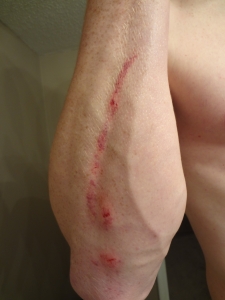 Once my brain started working again, I put my chain back on and started wondering if this ride could get much worse. It was raining, I had almost gotten hit by two cars, and I had crashed my bike, all in the matter of two miles.  I subscribe to the camp of ‘what doesn’t kill you makes you stronger’ and continued on for an uneventful 20 mile ride. The moral of this story is that you shouldn’t make sharp turns on slick surface, common sense to most, a hard learned revelation for a newbie triathlete.