I Don’t Know Why He Even Bothered To Ask

My bad procrastination habit meant the answer was always ‘it’s due tomorrow’… except for this time. ‘It’s due in two days’, I told my father, referring to the Huck Finn project I’d been assigned for my 11th grade English class. I had chosen to make a model of the raft Huck used to float down the Mississippi, except instead of building a miniature replica, I wanted to make a full-size raft and float it down the Papio Creek. Most parents would have told their children that wasn’t feasible and that they needed to assemble a reproduction from Elmer’s glue and Popsicle sticks, but not my father. He helped me design and build a four foot floating pontoon made from concrete form tubes, plywood, plastic sheeting, and 2’x4’s. We then took that raft over to the local pond and captured video of me paddling away to freedom. We stayed up all night editing together a video that garnered an A+, despite the fact that I never read the book!

He Always Supports My Crazy Ideas

My love of engineering is most certainly a result of my father. In the 6th grade, he taught our class about rockets, explaining the basics of aerodynamics, Newtonian physics, and why golf balls have dimples.

In middle school he helped our Destination Imagination team build a crane with a 20 foot boom and electromagnet on the end, and then the following year a robot with a moving arm and  ‘claw’. I learned so much about gears, motors, pulleys, and electricity from those builds.

The projects got really crazy in high school. How about the time my father had to convince the cops that my spud gun was really for an Algebra project? Or when he scoured the web to find a design for a solar death ray for my Calculus project? 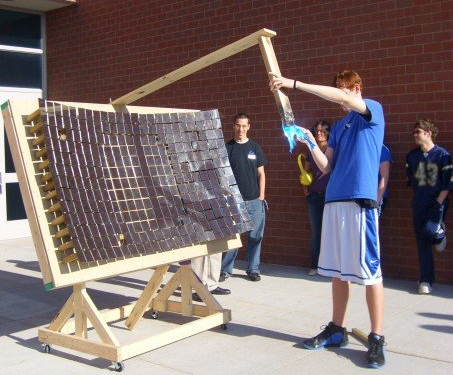 My father’s support has continued into adulthood. He Drove with me to Arizona for an Ironman triathlon and then returned three months later to crew for my ultramarathon. I was in rough shape after 60 miles and don’t think I would have finished without his encouragement.

No matter how outlandish or extreme, ridiculous or ill-conceived. I remember three years ago, walking in to work to tell my boss that I was quitting to try to start my own business. It was a decision I was extremely nervous about, quitting a great job to pursue something I had no idea would work out. On that walk into work, I got a text message from you, Dad, that read ‘Follow Your Dreams’. Those words meant a lot to me, knowing that if this new venture didn’t work out, I would still have your love and support to fall back on. That’s why I wanted to write this post, to express my gratitude for the decades of caring and encouragement you’ve provided.