Goal #19 on my 30 before 30 list was to climb Mount Kilimanjaro, the highest peak in Africa. This idea was hatched by my friends Mike and Sarah, and they let me tag along on their adventure.

I did zero specific training preparing for this climb, and bought all my gear one week before, hoping my base level of fitness would suffice for what I assumed was just ‘a long hike’.

There are several routes up the mountain and we settled on the Lemosho route provided by Trekking Hero for it’s scenic views and high success rate.

I met Mike and Sarah in Chicago, we did an escape room Sunday night, and flew Ethiopian Airlines to the Kilimanjaro Airport on Monday morning. 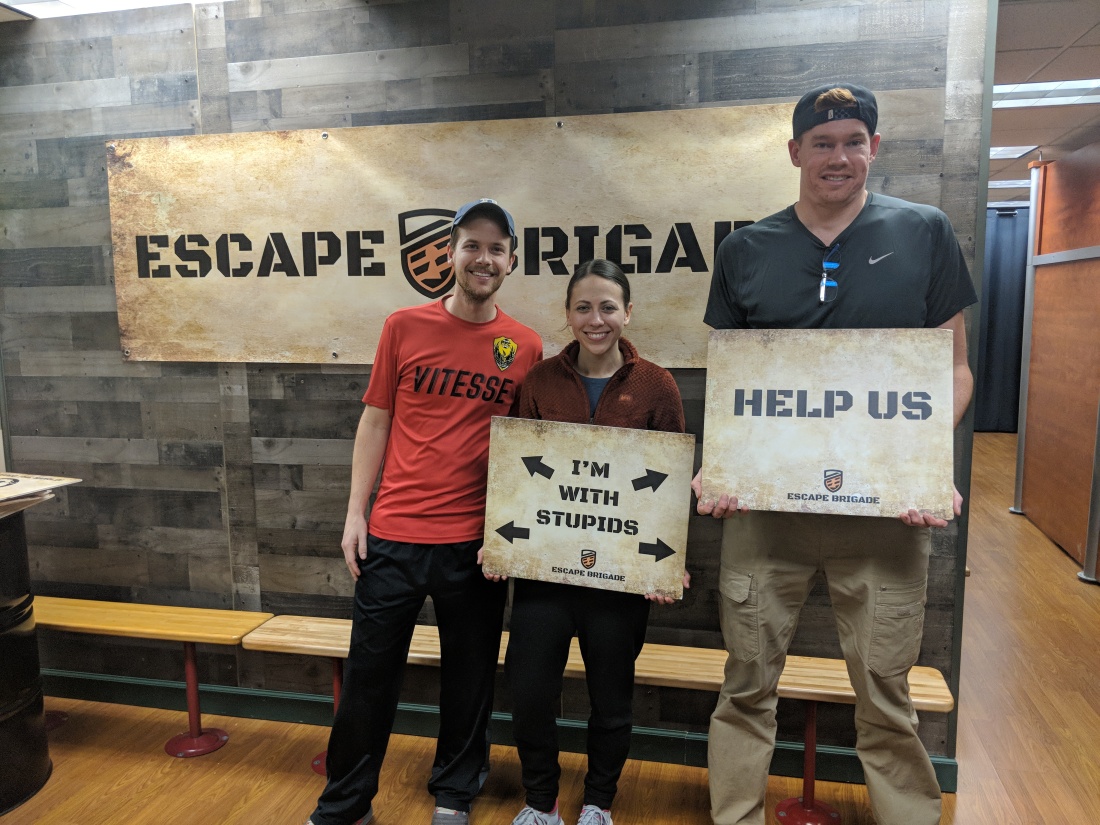 I began feeling the altitude during our layover in Addis Ababa, Ethiopia at 7,000 feet. I was a little worried as Mike and Sarah were each given over 20 Diamox pills, which are used to prevent altitude sickness, and I was only prescribed 6. We arrived in Tanzania, paid $100 each for a visa, and then took a 45 minute ride to our hotel in Moshi.

Our day began with a five hour drive to get to the trailhead. We stopped in town for supplies and would also make quick stops along the side of the main highway to pick up porters, our transport van slowly filling to capacity.

We checked in at the Londorosi gate and then drove another 45 minutes to the Lemosho trailhead. The guard with an AK-47 at the trailhead was a little disconcerting.

Our group was made up of five Americans, one Canadian, and two South Africans. Five of us were in our 20’s, one in his 40’s, and two 60+. We saw some monkeys as we hiked through the rainforest, which would end up being the only wildlife we would see on the mountain. This day was a little bit of a shock. We hiked for a little over two hours, and only three miles, but I was tired at the end of it.

This was our longest day of the entire trek, consisting of 11 miles of hiking spread out over 9 hours.

Our hike up Kilimanjaro was fully supported by a small army of people. Our group of 8 climbers was assisted by a total of 30 guides and porters. I had a small backpack that I carried during the day while a porter carried my 90L duffel bag that held all my other gear. We would leave camp, the porters would pack everything up, come running past us carrying all of the gear, and have camp setup before we arrived. 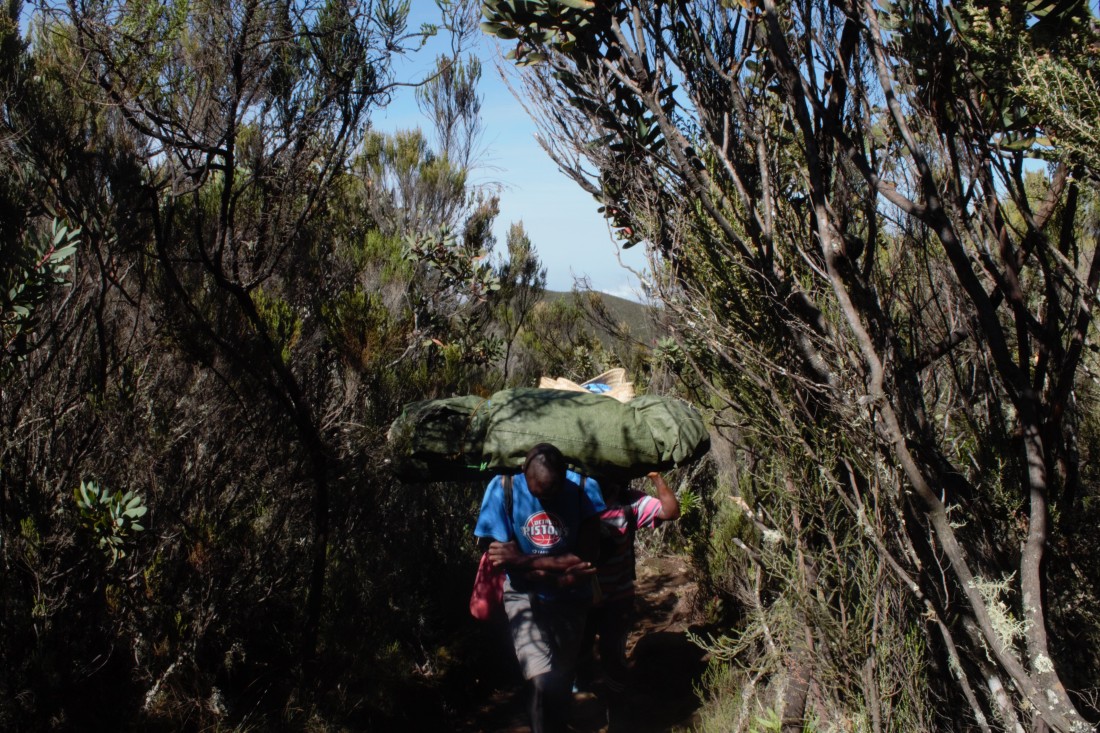 We quickly got above 10,000 feet on this day, which was very noticeable on the uphills, as my breathing became unexpectedly labored. We saw the peak of the mountain for the first time as we crested one ridge, only to dip back down to Shira I camp where we had a boxed lunched consisting of fried chicken, fruit, and assortment of carbs.

The rest of the afternoon we hiked across the Shira Plateau. It started to rain in the afternoon with an accompanying fog as we rolled into camp at 12,500′. 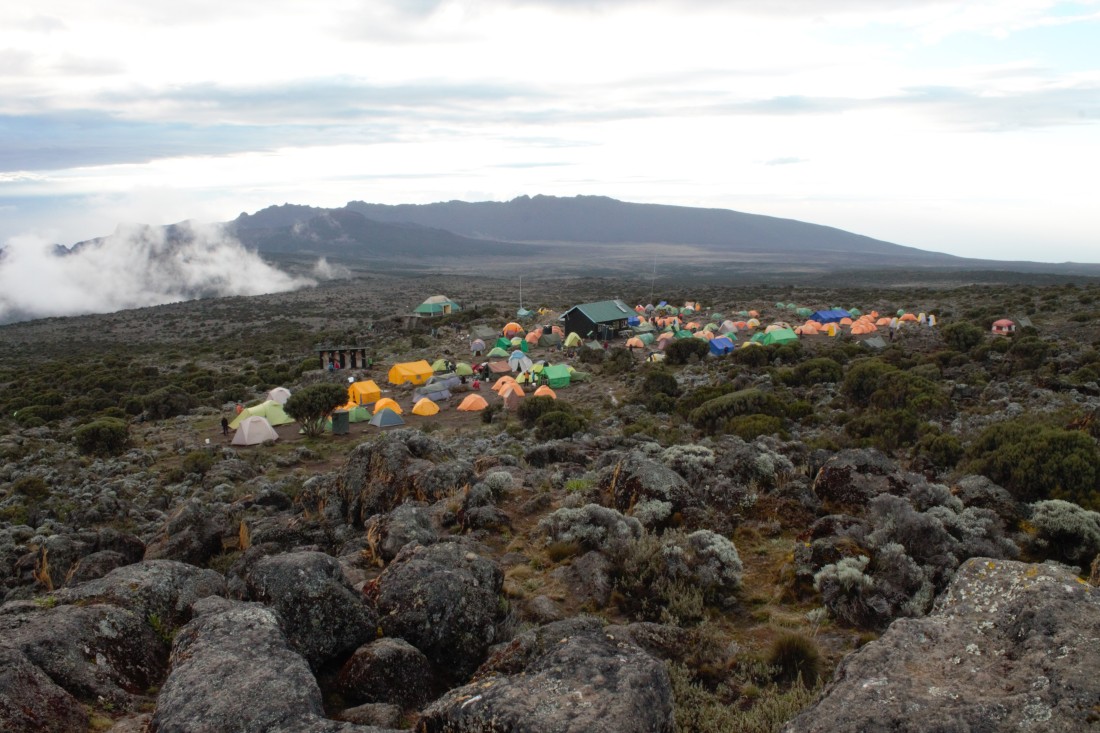 Camp was great. Everyone had their own tent, except Mike and Sarah, who had a two person tent, meaning you put two people in a one person tent. There was also a large dining tent where we ate all our meals. Breakfast consisted of porridge, crepes, toast, and eggs, while lunch and dinner were made up of some combination of fruit, rice, soup, and or noodles. Coffee and Milo (similar to Nesquik?) were served with every meal.

Starting on this day and continuing the rest of the hike, the views in the morning were spectacular. To one side, we had an unobstructed view of the mountain. To the other, we could look down at the city of Moshi, veiled in a layer of clouds.

One member of our group dropped out early in the morning. The guides did the best they could to assist him, carrying his day pack and water, and having a guide stay back with him while the rest of us went ahead, but in the end, the task ahead was too daunting.

This day’s hike involved a lot of ascending right from the start. After a couple of hours we got up 15,000 feet at Lava Tower. We ate lunch for an hour, giving our bodies a chance to acclimate to the altitude, before descending down to our camp for the night. As we worked our way back down, it started pouring rain. The weather on the mountain could change rapidly. Clear skies one minute would yield to a downpour of sleet the next.

The guides were great, maintaining an easy pace and telling us where to step on difficult sections. 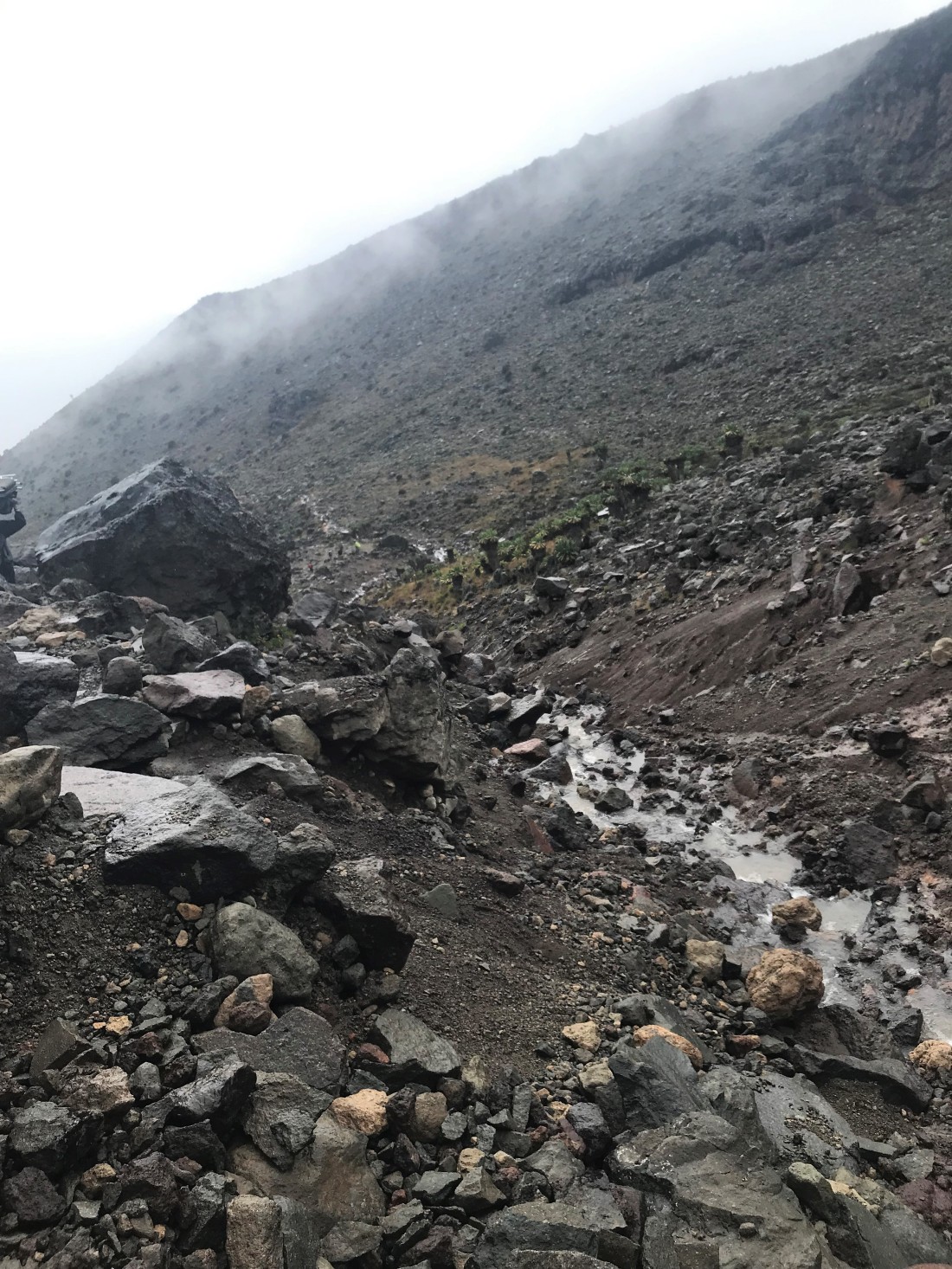 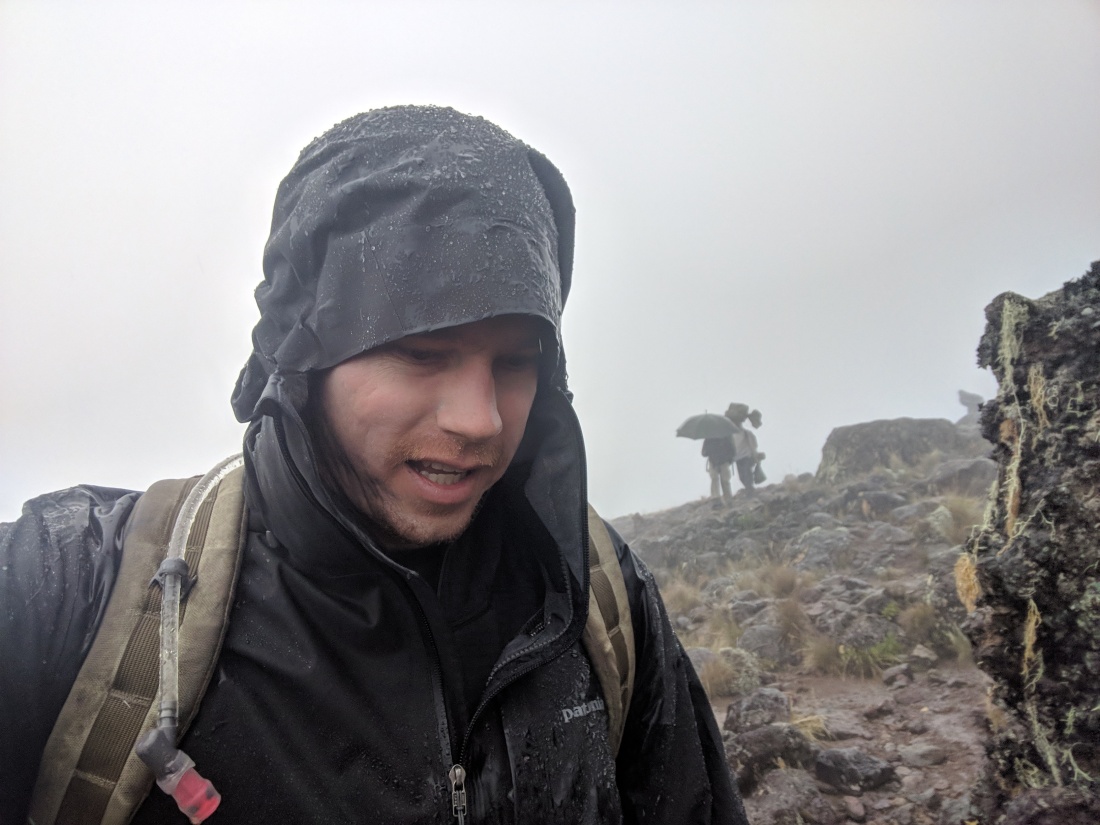 The weather cleared up as we arrived into camp.

This was a short day, what would be the first of two prior to our summit night. We got a late start and could already see a large traffic jam forming up the Baranco Wall. This was the most technically difficult part of the climb, requiring actual climbing and scrambling rather than just hiking. Like, you could fall to your death if you had a big enough misstep. Watching the porters navigate this section was hair raising. They would create their own routes up the wall to avoid the traffic jam all while carrying large 30 lb duffel bags. We probably waited an hour on the face of that wall while the groups ahead of us navigated the technical terrain.

There was a landing at the top of the wall, which we arrived at just as the clouds rolled in. 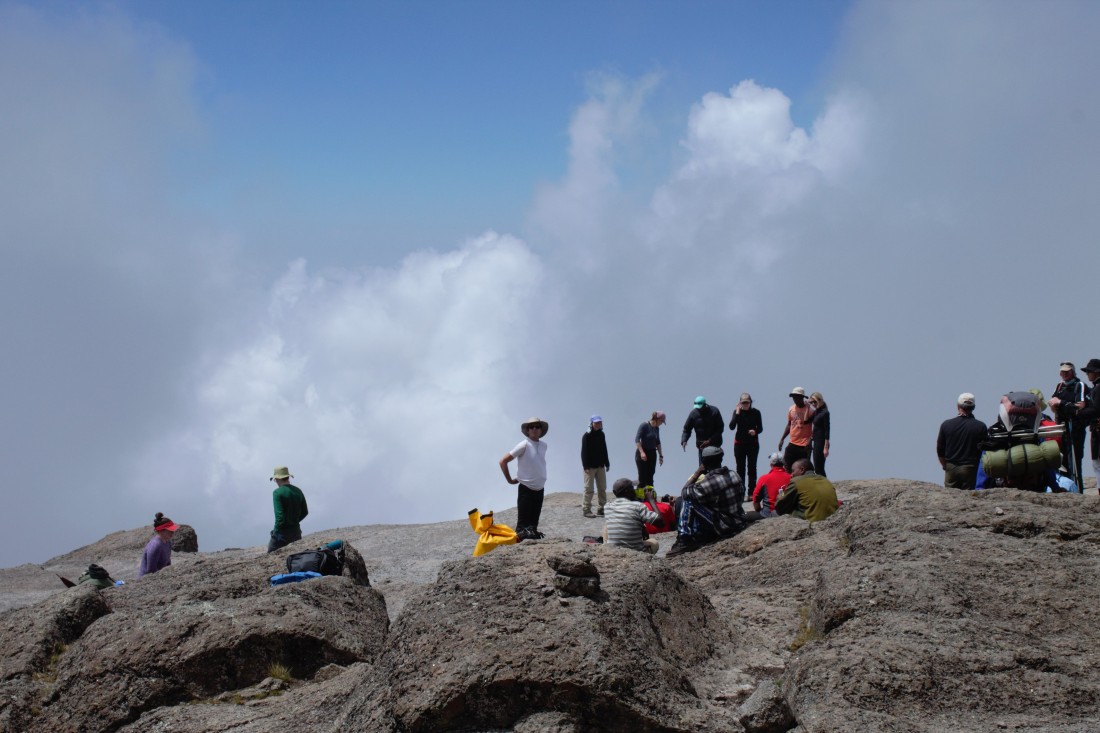 We hiked for another two hours, including a very steep dip in and out of the Karanga Valley, before arriving at Karanga Camp.

These next details could be titled #FirstWorldProblems, as in things we take for granted in the United States, but aren’t guaranteed in the developing world. If I could change anything about this hike, it would be the bathroom situation. There were bathrooms at every camp, even with urinals, but no toilets. Instead, there was a hole in the ground straddled by two bricks. The foreigners were not adept at using such restrooms as evidenced by the bodily waste that didn’t make it into the hole. It’s difficult to describe that smell with words. Some of the outfitters had there own portable toilets, and If I were to do this again, that would be an upgrade I’d gladly pay for.

This was our second short day. We got to base camp before lunch, dropped off some gear, and then climbed another 600 feet for altitude acclimatization.

After returning to base camp, I took a two hour nap, woke up for dinner, and then went back to bed to try to catch some sleep before our summit attempt, which would begin in the middle of the night.

We woke up at 11 pm for some coffee and cookies and started hiking at midnight. The full moon meant a headlamp wasn’t needed. I wasn’t sure if Sarah was going to make it. She had started feeling sick a couple days prior and looked miserable as we began our summit hike.

Coming into this trip, I thought Kilimanjaro was just an easy hike. Something anybody of decent fitness could do. The hike to the summit was much more difficult than I imagined it would be. I’d say the difficulty was equivalent to running a marathon. Breaks were very short compared to the previous days. Trudging along, I could really feel the effects of altitude. During this six hour climb, we would go from 15,000 feet to over 19,000 feet. We were moving at a snails pace, but my heart was pounding away.

The climb seemed never ending. In the dark, we would think we were coming up to the top of the mountain, only to realize that we were just cresting a ridge that obscured the other half of our climb.

Reprieve from the constant ascending finally arrived when reached Stella’s Point, which marked the rim of the crater and the end of the steep uphill climbing. The sun began to rise, and we made our final push to the summit. 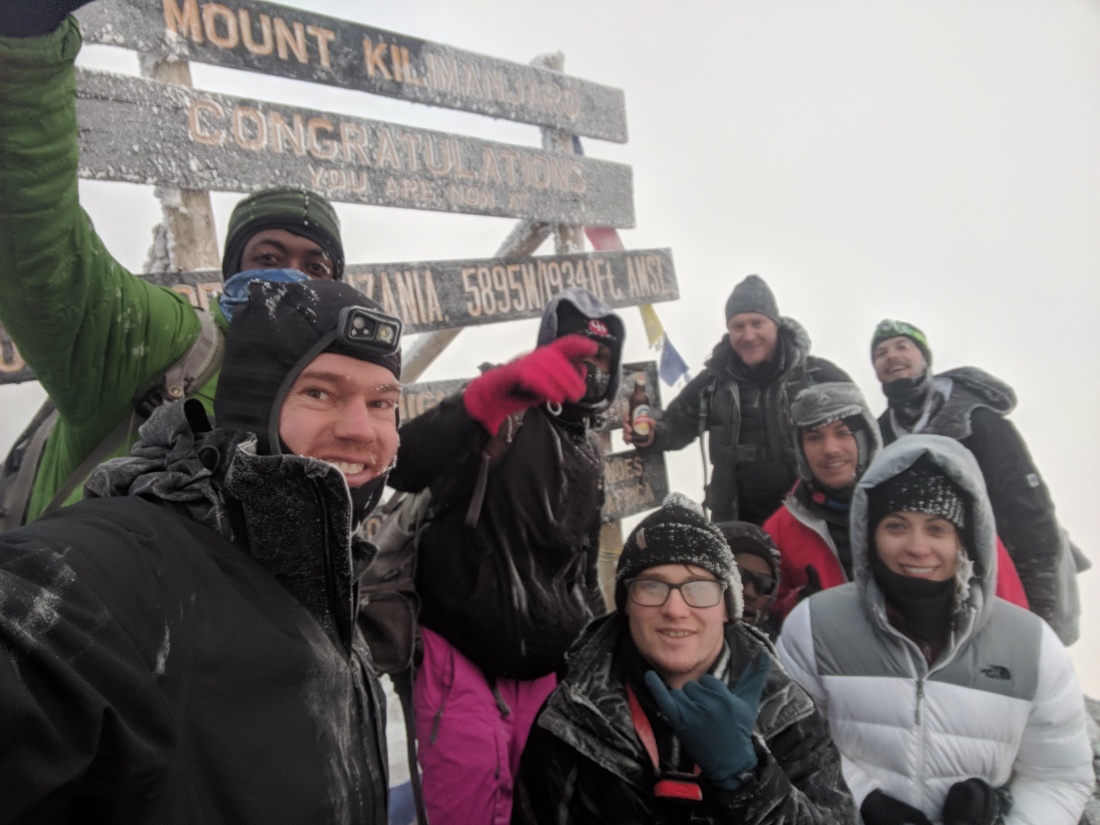 I was elated when we reached the summit. The unexpected difficulty of the last six hours made arriving at the summit that much more gratifying. 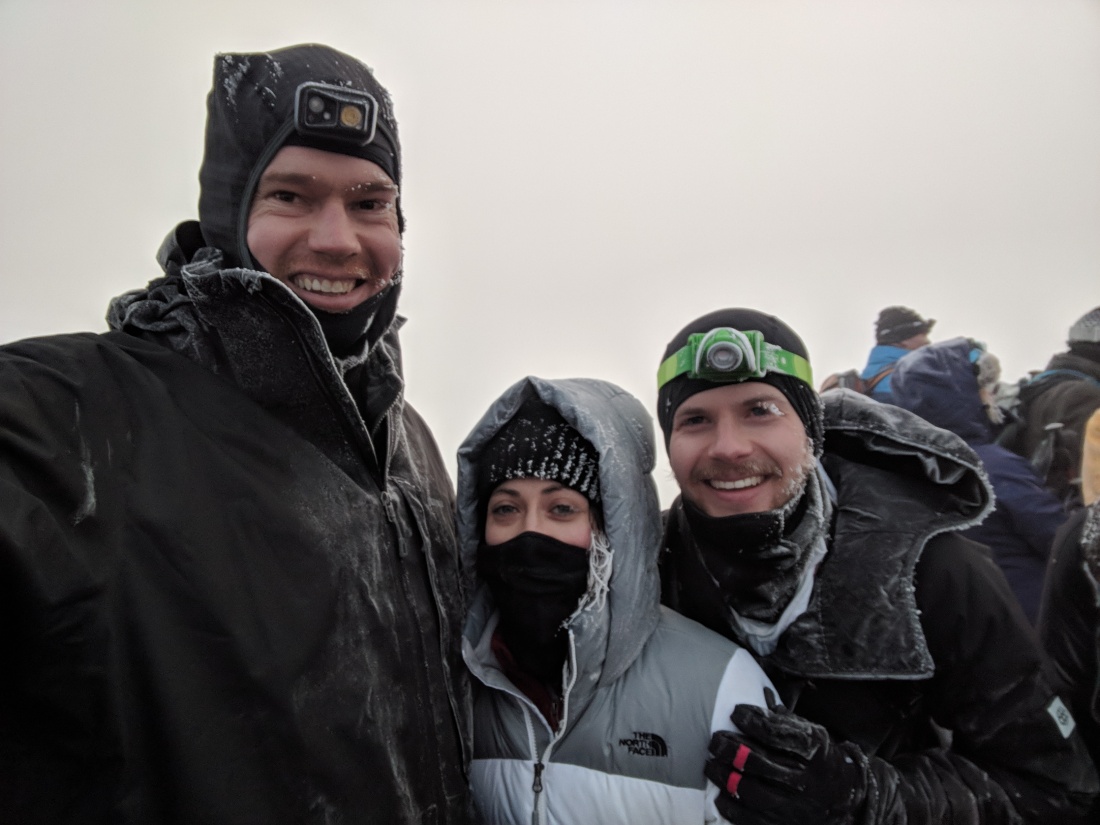 We spent a quick ten minutes on the summit for some pictures and then made our way back down the mountain, taking a shortcut route on loose dirt. It was a controlled slide all the way down. Dig heel in, slip a couple of inches, fight to maintain balance, rinse and repeat. We got down to base camp, took a two hour nap, and then continued descending down to Millennium camp.

It was a four hour hike back to the Mweka Gate which marked the conclusion of our trek. The beer lady was doing good business. We got our finisher’s certificate and rode back to the hotel.

Climbing Kilimanjaro was a unique experience. It was my first time to Africa and my first multi-day hike and mountain summit. I have no desire to complete any of the other ‘Seven Summits’, but am grateful for having the opportunity to do this one. The entire trek was tougher than I imagined, which will make it more memorable. Thanks again to Mike and Sarah for planning everything and letting me join in on the adventure!