This story takes place 11 years ago when I was a sophomore at the University of Nebraska at Omaha studying Electronics Engineering.

I don’t remember exactly how I got this idea, but I must have recently watched Fight Club. There’s a scene where Tyler Durden talks about his job as a movie theater projectionist and how he splices single frames of pornography into family films (30 seconds into the clip below).

I figured I could do something similar, but much tamer, inserting risque photos into a teacher’s PowerPoint presentation. I had the perfect target in mind: Professor Detloff’s Electronic Circuits I class.

Professor Detloff was universally disliked for his difficult classes and sardonic personality. He always seemed to have a chip on his shoulder, probably because he taught the most classes, but was lowest paid of all the faculty. He was difficult to deal with, but was a teacher you grew to love after four years of schooling.

It was March 31st, so I’d have to work quickly to have my scheme ready for April Fool’s day. That night, I combed the internet for pictures. I didn’t want full nudity, but definitely scantily clad. Not enough to get expelled, but enough to get a talking to. Bikini photos of Pamela Anderson fit the bill. After that, I downloaded Prof. Detloff’s presentation for class the next day from the class website. I then layered the voluptuous photos of Miss February 1990 on top of the slides and set up the timing so the pictures would only briefly flash on screen. I was a PowerPoint master by the end of the night.

The morning of April 1st, I got to class 20 minutes early. Prof. Detloff was a creature of habit. He’d load his PowerPoint on the projector 15 minutes before class started and then head out behind the building to smoke a cigarette. He commented on how odd it was to see me in class so early.  This class started at 8:00 AM, way too early for my collegiate circadian rhythm. I was usually the one sneaking in late if I showed up at all.

I waited a minute after he left, ensuring he was truly gone, and then sprang into action. Detloff always added problem set slides to the presentations that he posted online, so I loaded my flash drive and quickly copied the new ones over to my rigged presentation. I had plenty of time before he would return, but feared one of my classmates would rat me out if they saw what I was doing. These were the straight A, get stuffed in a locker, take school seriously types, and snitching was a real possibility.

I was done and back in my seat as my groggy eyed classmates filed in. Detloff returned exactly at 8:00 AM and class began

Today’s lecture was on operational amplifiers. It was a complicated topic, way too complicated for me to explain to the average layman, because, well, I never actually learned it.

He clicked from the 2nd to 3rd slide when the first image flashed on screen. It was only noticeable if you knew it was coming, and barely so then. I glanced around the classroom to see if anyone reacted. Nothing.

Two slides later, another photo briefly displayed. I notice a couple guys had quizzical looks. They knew they saw something, but weren’t sure what they saw. 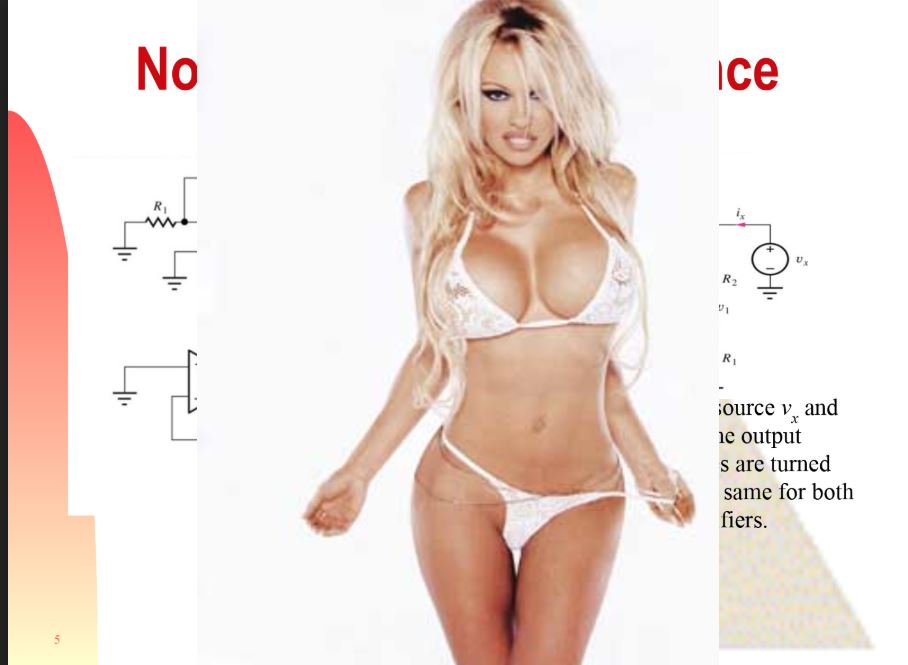 I had set up the timing so that as the presentation went on, the photos would be displayed for longer and longer amounts of time, from barely perceptible to a full second.

When the next picture flashed on screen, my buddy Matt leaned over and said, “Dude, did you just see a naked lady?!” I told him he was going crazy.

When the fourth photo came around, the entire class burst out laughing. Pamela’s surgically enhanced figure was practically life-size projected onto the pull-down screen.

The whole class was in on it now, but Detloff was still oblivious. Somehow I’d timed things perfectly. Detloff would click to a new slide, start reading off of it, and as he turned to address the class, the image would appear and then quickly disappear before he turned around.

There was one image that he noticed out of the corner of his eye. He stopped briefly, but must have assumed that old age was playing tricks on him 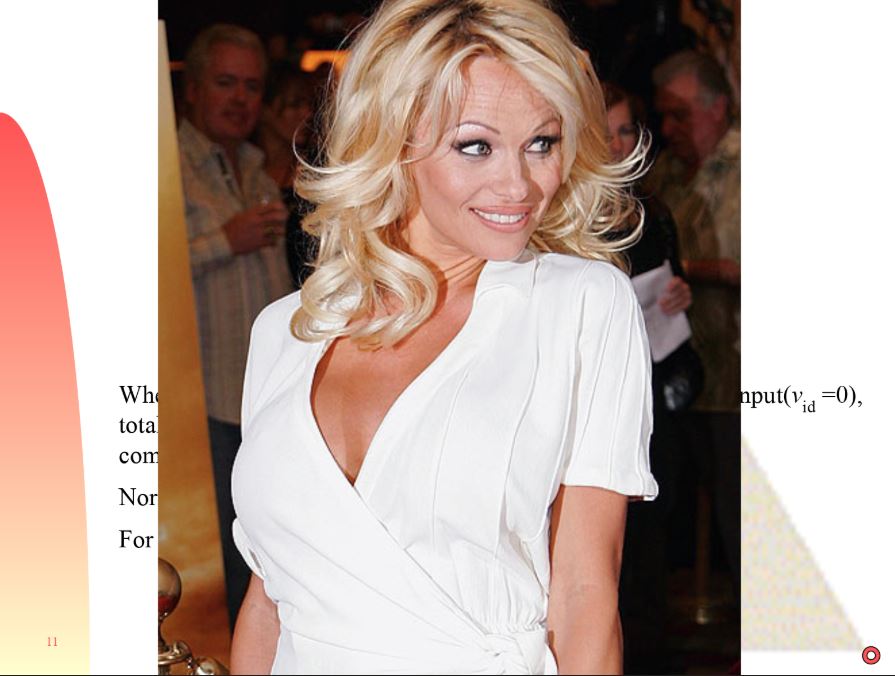 He sensed something was up near the end of class. He went back and forth several times between two slides and mentioned that a slide was missing, but continued on with class anyways. When the lecture ended, I scurried out before a full investigation could be launched.

All the computer and electronics engineers had another class later that day where I was able to take credit for the prank. I was temporarily king of the nerds.

One thought on “The Pamela Anderson Slideshow”